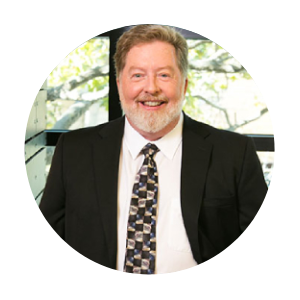 Kenneth Sayre-Peterson is a Partner Emeritus with Joseph, Cohen & Del Vecchio having retired from practicing law at the end of 2017. Mr. Sayre-Peterson remains an advisor to the Firm. Prior to his retirement, Mr. Sayre-Peterson’s core focus was on banking, credit unions, regulatory and enforcement matters, money transmitters and digital currency, corporate, securities and trust law. He joined Joseph, Cohen & Del Vecchio in 2012 following his retirement from the California Department of Financial Institutions (DFI), now a division of the Department of Business Oversight, where he served as legal counsel during a twenty-two year career.

Mr. Sayre-Peterson acted as the General Counsel for the California Department of Financial Institutions from June 2007 until his retirement in November 2011. He was responsible for assisting the DFI’s Legislative Section and spearheaded a four-year project in which he drafted substantially all of the enabling legislation for a restatement of California’s Banking Law. This project culminated in the codification of the Restated Banking Law in the California Financial Code in January 2012.

Over many years, Mr. Sayre-Peterson played a significant role in numerous troubled bank resolutions and worked closely with senior regulatory staff at the Federal Deposit Insurance Corporation and the Federal Reserve Bank. As the DFI’s General Counsel, he was instrumental in policymaking and the direction and scope of its examination and enforcement programs and worked with other senior members of the DFI to implement regulatory policies and procedures applicable to state-chartered credit unions and licensed money transmitters.

Prior to joining the DFI in 1988, he worked as staff tax counsel for four years with the California State Board of Equalization. Before entering state service, he specialized in appellate work and lobbying while in private practice in Sacramento.

Mr. Sayre Peterson has been a member of the State Bar of California since 1983 following graduation, with distinction, from McGeorge School of Law, Sacramento. He earned a Bachelor of Arts degree in History from California Polytechnic State University, San Luis Obispo, 1977.